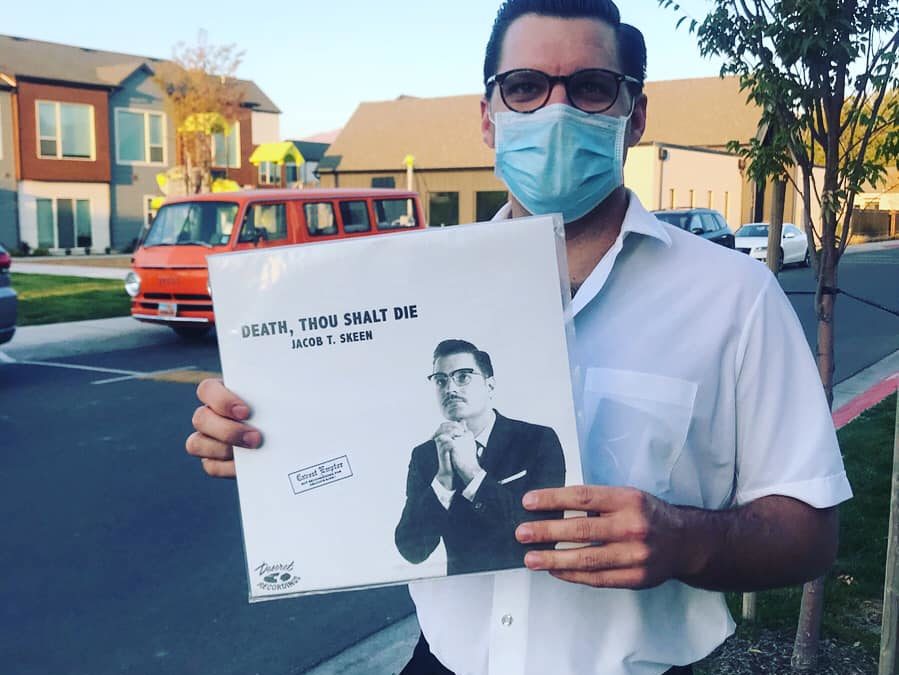 Covid has affected every musician. We live and breathe for our single hour on the stage. Everyone’s band is struggling right now. That’s why Record Spread is so incredibly important to us. With the first-month kicking things off strong, we’re all doing something right now to help out the music community.

When chatting briefly with Jacob T. Skeen about record spread he divulged he received his records the very week everything got shut down. Can you imagine? I wager you absolutely can. We’ve all put our dreams aside this year. We’ve lost jobs, gigs, vacations, birthdays, and time spent drinking beers with our friends.

I first came to learn about Jacob T. Skeen when I made some pinback buttons for him after the release of his ultra-cool single “I Won’t Roll In My Grave” released in October of 2017. It was single printed on a Flexi disk. If you haven’t come across a Flexi disk for a while they are single-sided records similar to those used to promote on the back of a cereal box and in the back of dirty magazines. Sometimes you had to put a quarter down on them to get them to play without skipping, they weren’t always the most convenient, but always exciting.

The reason I picked Brother Skeen’s record is simple. It’s good and I like it. I think you will like it too. I’ve watched him hold his own as a one-man band on many stages. I’ve watched him set up a reverb unit bigger than the amp I gig with in addition to a drum set, guitar, and amps. Why? It sounded good. He’s talented and passionately doing what he loves when he’s making music.

He was gearing up for an Italy tour with this release. When he can reschedule that tour he will do well in Europe. There is a desire to hear the blues from America there that will be greatly fulfilled by his unique tones and style. He takes sounds of velcro laden fuzz and blends them with dark hard-hitting lyrics saturated in reverb.

I hope you get a chance to sit down with this record open the included hymn book and dedicate some time to enjoy this record as I have. It pairs well with a 100 proof bottled in bond white label Evan Williams neat or mixed into a cocktail.